Today Antutu reveals our list of the global Top 10 best performing iOS devices for August 2019. How the iOS list has changed in August? Check out our most updated top 10 iOS list as measured by the average Antutu score.

The data are collected between August 1, 2019 to August 31, 2019. The list consists of iOS devices that have at least 1,000 units running the latest Antutu benchmark V7, and the scores are averaged across all devices, making the results more representative. Additionally, the list includes both iPhone and iPad products 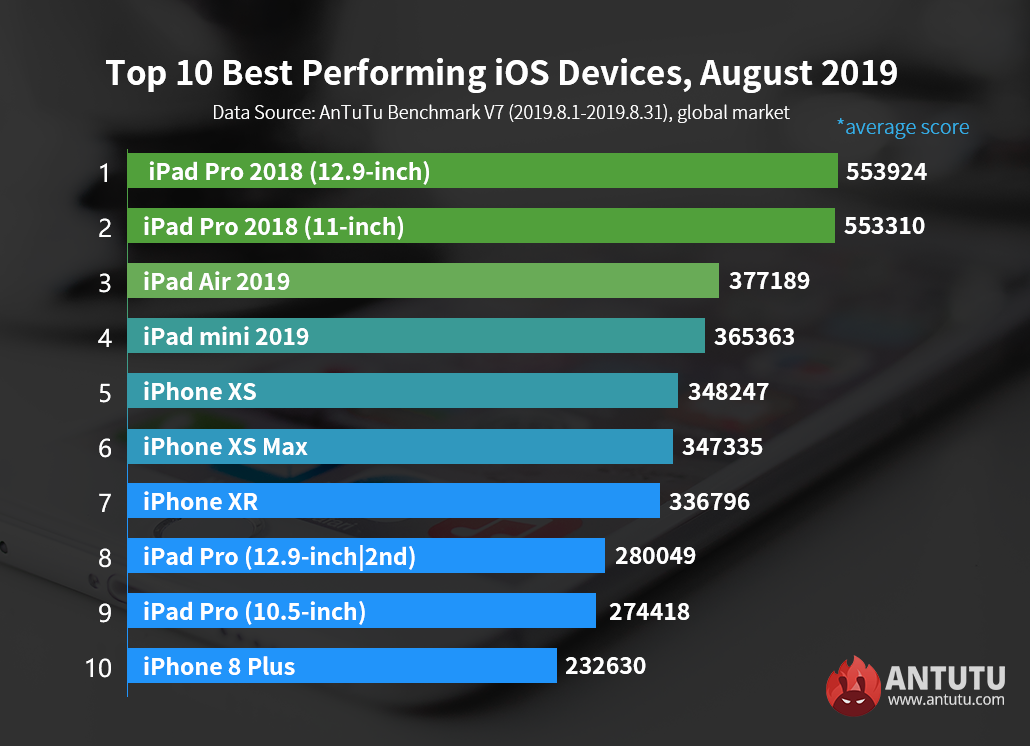 Both the 2018 iPads are powered by the A12X Bionic chipset which is built on a 7nm process and has an eight-core CPU, a seven-core GPU, and a state-of-the-art Neural Engine that can perform up to 5 trillion operations per second. Even now, A12X Bionic is still a flagship processor.

Coming in eighth and ninth are the two 2017 models of the iPad Pro which are both driven by the A10X Bionic chipset. The 10.5-inch model scored 280,049 points while the 12.9-inch model scored 274,418 points. The two models can run smoothly thanks to the iPadOS.

iPhone 8 Plus secured the last spot with an average Antutu score of 232,630 points. With the release of the new iPhones, iPhone 8 Plus is expected to fall off the top 10 list of next month.

Above is the global Top 10 best performing iOS devices list for the month of August. For more information about the ranking list, please visit Antutu official website or download AnTuTu Benchmark and check in the menu of “Ranking”.